Ghanaian gospel legend Nicholas Omane Acheampong pleads with John Dramani Mahama to step aside for President Akufo Addo to rule for the next four years.

The “Tabitha Kum” hitmaker, who is a staunch supporter of the New Patriotic Party and Nana Addo government, thinks Ghana will greatly benefit if Nana Addo runs for a second term.

According to him, Ghanaians should stop politicising issues and speak the truth.

“I’m setting the record straight,” he told OKAY FM today. “Let’s put aside the celebrity tags and politics. It’s a past issue. The country doesn’t belong to any politician. It’s about time we speak the truth. If someone is a musician, it doesn’t mean he is out of wisdom.” 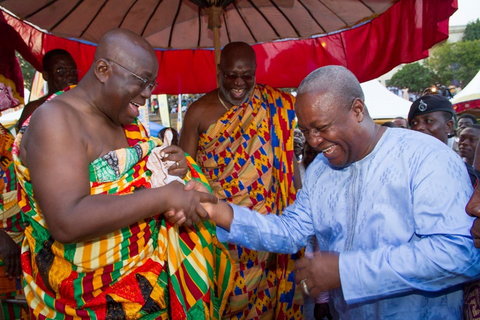 He claimed that John Mahama lost the 2016 election because he opposed Nana Addo’s free education policy, adding that “I fell for Nana Addo after he launched his ‘Free Education’ campaign.”

He stated that Mahama should step aside and let Nana Addo win the forthcoming December general elections to improve the free education policy.

“Ex-President Mahama, if possible, allow Nana Addo to rule for the next four years so that he can improve the free education policy.”

Watch the full interview below:

‘I will not retract’- Mahama stands by ‘Do or Die’ comment, tells critics to consult dictionary

Watch: Nana Addo and Bawumia’s reactions after Supreme Court ruled in their favour

Mahama will win court case, Nana Addo won’t accept defeat and there will be war- Ibrah One

Sarkodie, Pappy Kojo And Other Musicians Abroad To Be Evacuated Back...

Ezekiel Emmanuels - 01/06/2020 0
Sarkodie, Pappy Kojo, Kwaw Kese, D-Black and other Ghanaian musicians stuck and stranded abroad in the wake of coronavirus have received good news as they will soon...

I usually rape my 9 year-old stepdaughter whenever my wife...

Ronaldo’s departure from Madrid had little impact, but losing Messi...

Tiwa Savage finally explains how her bedroom video with her boyfriend...

FIFA Reveals How Much Ghana Will Receive for Qualifying to the...

Ghana rated the 5th best country in Africa and 67th in...

ABOUT US
Ghnewsbag.com is the prime news platform in Ghana at the moment, embedded with authentic news only. It’s a place to stay up-to-date with trending content across a growing array of topics having most original content focused on entertainment, lifestyle, sports, celebrities, religious, Tech, Health etc. We are committed to giving our readers the feel of accessing information at first hand.
Contact us: [email protected]
FOLLOW US
© 2020 - GHNEWSBAG MEDIA | All Rights Reserved | Privacy Policy | Talk to Us | The bag full of news!
This website uses cookies to improve your experience. By continuing to use this website, you agree to their use.Cookies settingsACCEPT
Privacy & Cookies Policy

This website uses cookies to improve your experience while you navigate through the website. Out of these cookies, the cookies that are categorized as necessary are stored on your browser as they are essential for the working of basic functionalities of the website. We also use third-party cookies that help us analyze and understand how you use this website. These cookies will be stored in your browser only with your consent. You also have the option to opt-out of these cookies. But opting out of some of these cookies may have an effect on your browsing experience.
Necessary Always Enabled
Necessary cookies are absolutely essential for the website to function properly. This category only includes cookies that ensures basic functionalities and security features of the website. These cookies do not store any personal information.
Non-necessary
Any cookies that may not be particularly necessary for the website to function and is used specifically to collect user personal data via analytics, ads, other embedded contents are termed as non-necessary cookies. It is mandatory to procure user consent prior to running these cookies on your website.
SAVE & ACCEPT